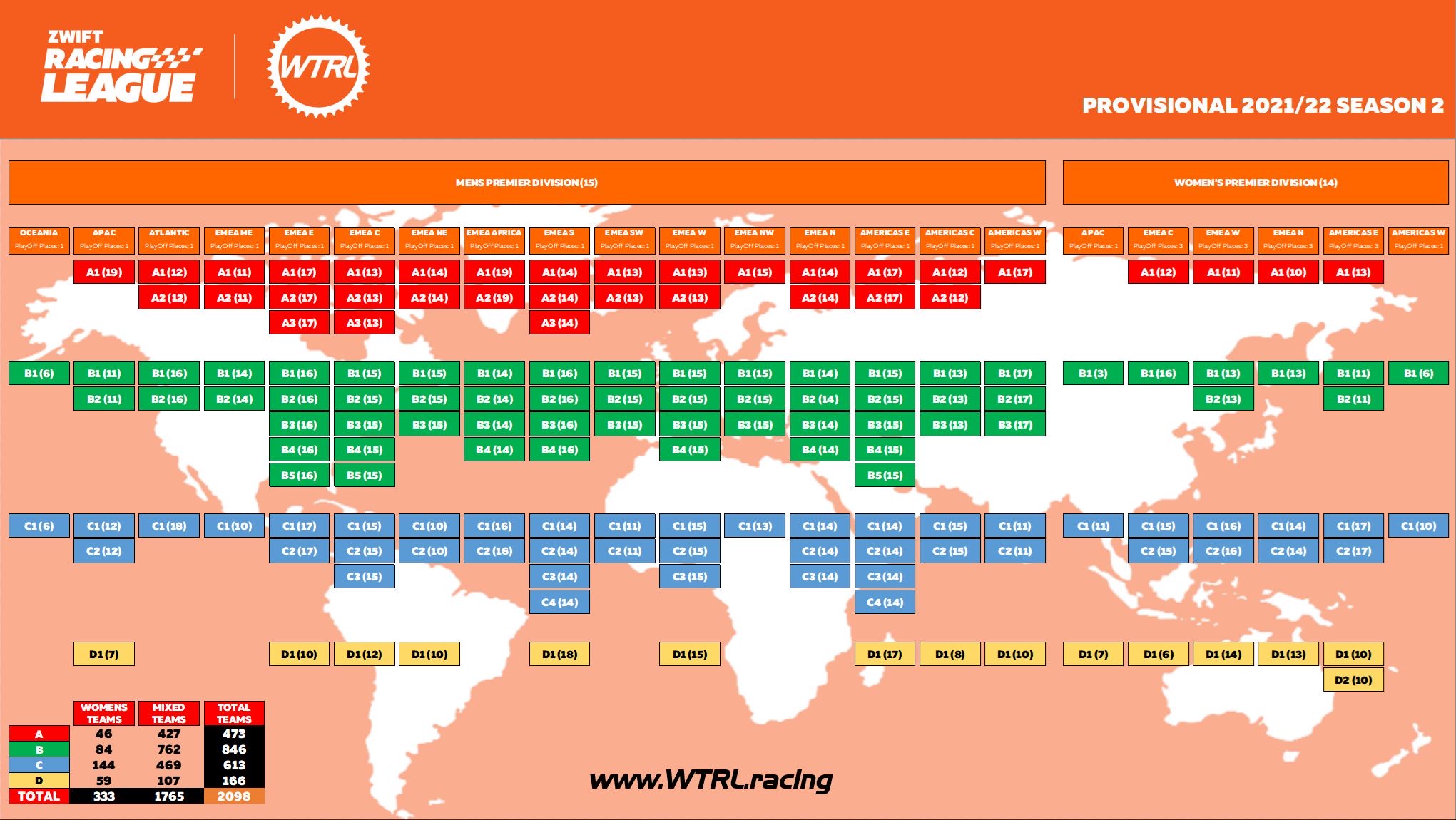 When Covid hit in March 2020, almost all social riding and racing for the year was cancelled. For many of us, that meant a blank race calendar and a whole lot of winter fitness not being put to good use.

HOWEVER, off the back of their successful Team Time Trial (TTT) events that the World Tactical Racing League (WTRL) had been running on the Zwift platform since 2019, Zwift approached WTRL to create the biggest weekly virtual Racing League with the aim of bringing more people into racing. Launched in mid-2020 and now 18 months on, the global league series is a huge success with over 9000 Zwifters across 126 divisions competing.

Called the ‘Zwift Racing League’ (ZRL), the competition has taken racing to the next level on Zwift. It’s well-organised bike racing on an unprecedented scale

So how does the ZRL work?

With a pyramid of leagues catering for all time zones and abilities (see Image 1 for the scale of the league structure!), the ZRL is a team event that encompasses both points races and Team Time Trials (TTT).

In each division, 8 races (each lasting 45-60mins) take place across 8 weeks, with points awarded based on a combination of individual team members finishing positions, fastest through segments times (FTS) and first across the line (FAL) results. All of which brings team tactics to the fore, just like you’d see in a normal road or crit race.

Teams are allowed a squad of up to 12 riders with a maximum of 6 riders selected for each race. This means in most races, there are c80 riders competing. Each season, divisions promote and demote the top and bottoms teams, providing a real focus for all teams.

During the last ZRL season, Tuesday evenings became race day for the GS Mossa Zwift Race Team (ZRT). Placed in the highest category community league (A), the division was made up of 17 teams. For some of our racers, it was their first venture into Zwift racing (not that you would have noticed with some of the performances!). Over the combination of points races and Team Time Trials (TTT), GS Mossa were consistently at the sharp end of each race, leading to a well-earned 5th position in the division.

The ZRL season was great fun, particularly from a social aspect, with not only GS Mossa ZRT using the instant messaging app ‘Discord’ during the race to discuss and implement tactics, but fellow club members see the race play out live through the streams available by Zwift over on YouTube (as shown in image 3).

With the buzz created from the season, there’s no surprise we’re back at it again this coming season!

ZRL offers some seriously competitive racing, and with the (real) 2022 race season creeping our way, there’s not many better opportunities for GS Mossa club racers to test their top end and get back into the competitive mindset.

Held over 8 weeks and having kicked off on 11th Jan 2022, GS Mossa ZRT have one team racing every Tuesday evening in Season 2 of the ZRL 21/22 Series. Made up of 13 teams, GS Mossa ZRT have been assigned to the EMEA West Division A2. With some stiff competition, including some familiar clubs such as London Dynamo, the team are keen to continue where they left off from the previous season.

Whilst the races predominantly give the opportunity to socialise and have a bit of fun during the winter period, the team would be delighted to better their previous league position and, even better, snag a podium spot!

Going forward there are two very exciting plans for GS Mossa in the virtual world which members can get involved in:

In late January 2022, Zwift are launching a great new feature - ‘Clubs’. Much like our GS Mossa ‘real-world’ weekend rides, ‘Clubs’ lets Zwifters organise themselves into groups, then take part in activities together. So what does this mean for GS Mossa? Well, very shortly GS Mossa Zwifters will be invited to join the GS Mossa Zwift Club. After which, we will be:

- holding a GS Mossa 2022 Zwift Championship. This will be open to all club members and will be structured to give members of all racing abilities the opportunity to take the cup home.

To date, GS Mossa have one ZRL team racing in the highest category level (A). This is currently the only level which enables all GS Mossa riders to be eligible to race. However, we recognise this doesn’t necessarily appeal to all GS Mossa Zwifters who wish to race. Our ambition for future seasons is to create enough interest across the club to allow us to have a GS Mossa Cat B and/or Cat C team, catering for more and more club members.

The ZRL has been a great way to stay competitive and provide some focus during the winter months. It’s fun, social and gets you fit! If you’d like to know more about what the club is doing on Zwift and would like to get involved, please WhatsApp Matt Davies who will be happy to chat more, as well as add you to the GS Mossa Zwift WhatsApp group. 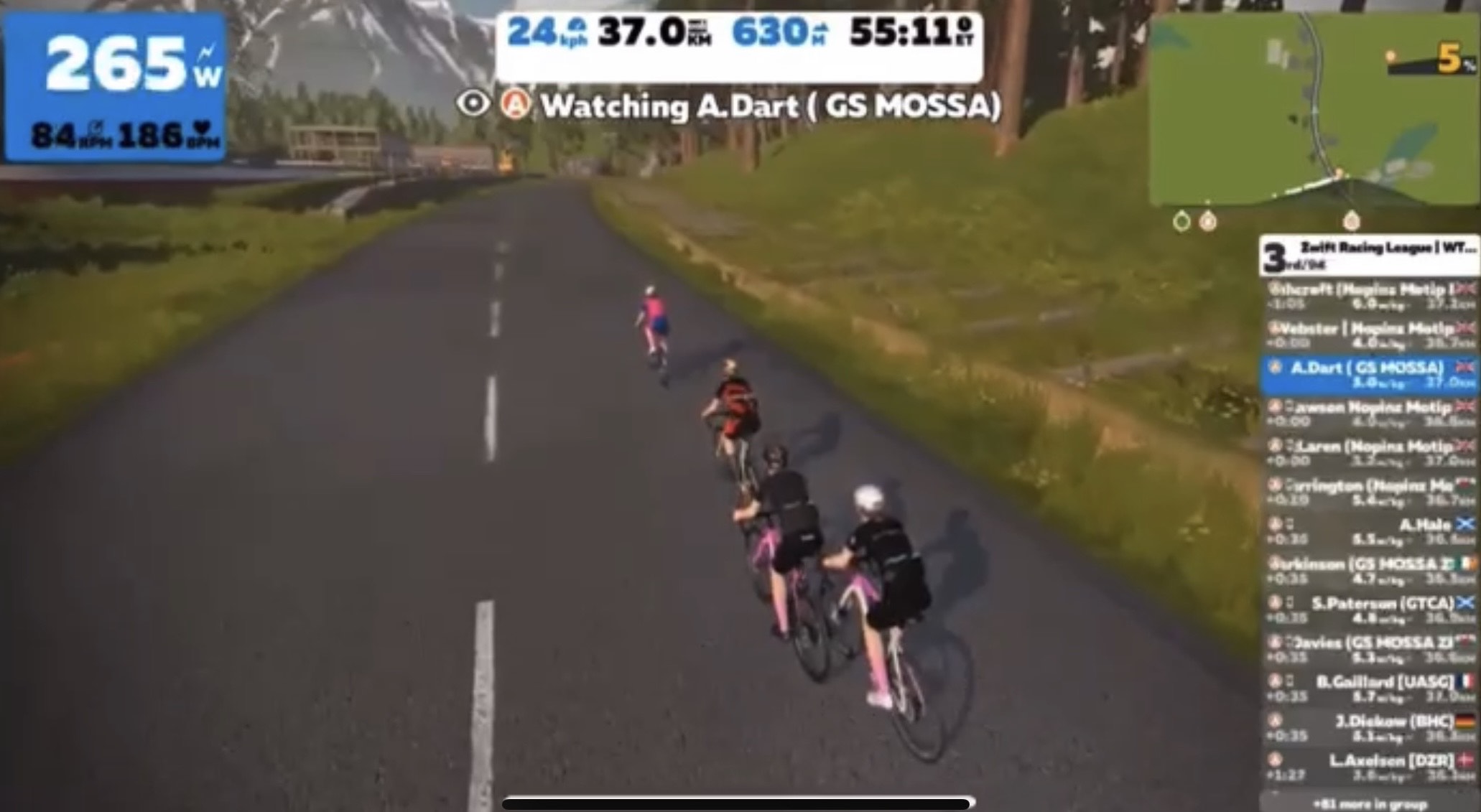